On Wednesday June 26 I boarded the M/S Paul Gauguin for the TravelQuest “South Pacific Cruise to Totality”.

The Paul Gauguin is no stranger to eclipse chasing; she has been guided successfully into the umbra in the South Pacific four times before. Captain Toni Mirkovic from Croatia and the trip organizers were cautiously optimistic about our chances of seeing the corona, though we will be cruising straight into some dodgy weather. We’re facing several days at sea before our first destination, Pitcairn Island.

The ship is small—300 passengers—but there are nooks and crannies to discover, and the swell of the daily routine to settle into. La Pallette and Le Grill and the pool bar are on deck 8; L’etoile (the buffet) on 5 is on the way down the carpeted hall from nightly cocktails at the casino and piano bar. Pass the reception and guest desk to push open a heavy door and descend a tight stairwell to the dive marina on aft deck 4. La Veranda, a fancier restaurant, is near the spa and boutique on 6.

People LOVE the Paul Gauguin. My first impression was, “this tub is fusty.” The ship is now twenty, and she looks it. The brown and gold upholstery and draperies are unfrayed but dated. The staterooms are stately but feel well used by others who’ve slept there before. In contrast, the sparkling expedition ship Orion makes the Paul Gauguin look like my parents’ basement.

I met another traveler who was cruising on the Paul Gauguin for the 15th time—not a typo. I thought, What the hell? By the end of the journey I understood completely and had fallen in love with the PG, too. The ship has a coziness and a congenial personality, and she’s just the right size—big enough to offer variety yet each space feels intimate. It quickly turned into home.

Those who’ve been on a cruise know that there are too many scheduled activities and it’s impossible to attend them all: movies, lectures, games, crafts, lessons, and live music. Snacks and drinks and singalongs and partying by the pool. Something for everyone. I spent the first day or so regrouping after the week on Rapa Nui; plus, it was raining (and continued to rain off and on until we reached Bora Bora). <FORESHADOWING>

The cruise astronomy program was led by Rick Feinberg, Editor (and new owner) of Sky and Telescope magazine; and Alex Filippenko, professor of astronomy at Cal Berkeley and well known for his appearances in the documentary series The Universe. Throughout the week science lectures included “Highlights of the Southern Sky”; “How and Why Eclipses Happen” (for the virgins); “What Happened to Pluto?” and “Flying Through Pluto’s Shadow on Sofia”; “Dark Energy and the Runaway Universe”; and “Big Bang and Cosmic Inflation”, among others. The content seemed to get more and more dense the longer we were at sea. Though Filippenko and Feinberg are delightful lecturers, the subject matter quickly went over my head. The other passengers, a disproportionate number of science nerds, paid rapt attention to the presentations and packed the Grand Salon auditorium.

Rainy day activities at sea included eating and drinking. Making pandanas bracelets and eclipse-themed souvenirs with the Polynesian staff. More eating, and more drinking. I made some drawings of ship life, and a solemn sketch of cloud-shrouded Gambier Island as we passed.

When the ship neared Pitcairn Island there were tender tickets to procure and a preparation lecture to attend. Captain Toni was unsure we’d be able to set foot on land as stormy weather could prevent an approach to the dock. It’s possible that the Pitcairners could employ their longboats to shuttle us to shore, but that would require descending from the ship via a sketchy 18-foot rope ladder. We’ll know more tomorrow. The 1984 film “The Bounty” was screened as a pop refresher of the details of Christian Fletcher’s famous mutiny on the HMS Bounty. We’ll meet his direct descendants and the families of some of the other mutineers when we reach Pitcairn. 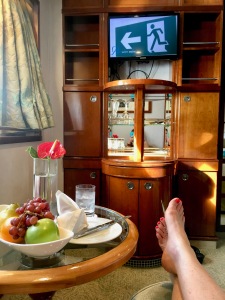 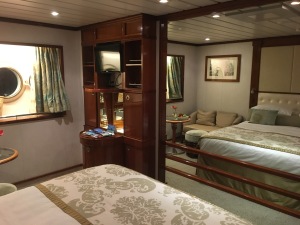 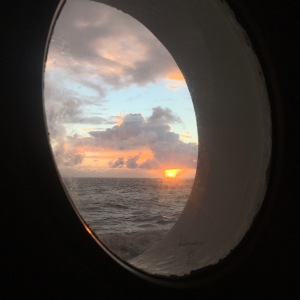 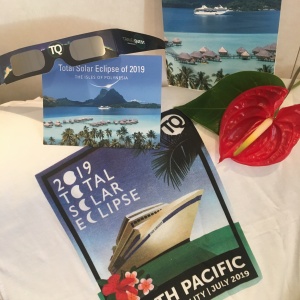 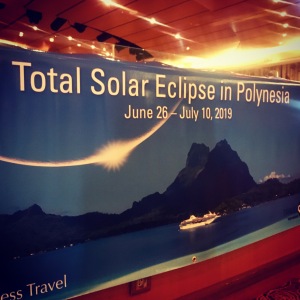 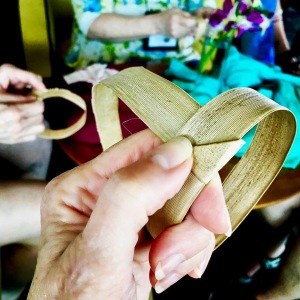 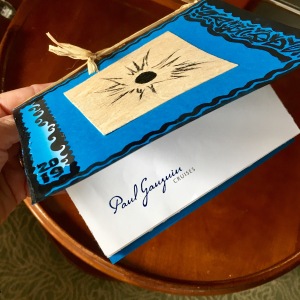 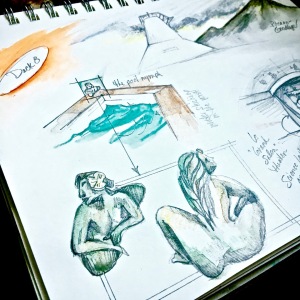