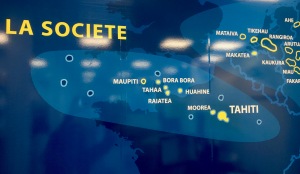 Wednesday, July 3, 2019. The pall aboard the PG created by the totality shutout exacerbated the already low spirits from the ongoing bad weather at sea and the Pitcairn fail. Disgruntlement circulated among actual professional astronomers and hardcore umbraphiles on the guest list, and they fomented unrest to whomever would listen around the pool and in the buffet lines. (These are the same individuals that found fault with niggling details in the science lectures and had actual conflicting opinions that they loudly voiced about Fillipenko’s dark matter statistics.) There was a way, they claim, to have seen totality, but I think their Monday morning quarterback plans would have compromised the itinerary and put the remaining island destinations at risk.

The rest of us got over it quickly; as we have learned from Jimmy Buffet, there’s nothing like booze in the blender to help you forget. (As one practical individual observed, pina colada in hand: “The casino on these eclipse cruises is usually poorly attended. Because this whole thing is gamble enough.”) In retrospect, of course I would have liked to witness my eighth total solar eclipse, but the experience was priceless. The emotional highs and lows ranged from elation (“we’re heading to clear skies, it’s a sure thing!”) to the sickening realization that the eclipse we paid thousands of dollars to see would not be seen. It wasn’t for the lack of trying, though—see the photo below of the Paul Gauguin’s Spirograph-like path in search of clear skies.

We returned to life at sea as we sailed back to the Society Islands—touring the galley and bridge, playing trivia in the piano bar, solving the jigsaw puzzle. I spent time in my stateroom, drawing—the shelf below my porthole windows became a mini studio. Independence Day came and went without undue observation, partly because the planned ice cream social was cancelled due to rain, but mostly because the staff dropped the ice cream on the deck because the ship was pitching in the rough sea. This was not a trip for those prone to motion sickness.

I shifted my expectations to the sun and sand and snorkeling that would hopefully come soon. 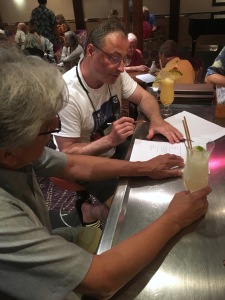