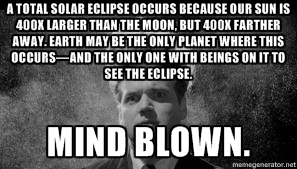 If you think you’ve seen a total solar eclipse, but aren’t sure—you haven’t.

A total solar eclipse of the Sun occurs on Earth when, during a New Moon phase, the orbit of the Moon sends it into direct alignment between the Sun and the Earth, completely blotting the disk of the Sun and casting a shadow that falls onto Earth. Those standing in that shadow witness an eclipse.

Not every New Moon produces a solar eclipse; the tilt of the Moon must be oriented exactly so with respect to Earth’s orbit around the Sun.

The width of the shadow—the path of totality—will be about 100 to 180 miles wide, and will vary based on how close the Moon happens to be from the Earth. The closer an observer stands to the center of that path, the longer the eclipse will be. The maximum length of totality is a little over seven minutes; usually they are much, much shorter. (As my husband noted after the four-minute eclipse in Egypt: “That cost a thousand dollars a minute.”)

A total solar eclipse occurs somewhere on Terra (fun fact! that’s the real name of our planet. And our moon is Luna, and the sun is Sol—no relation to the Hebrew baby name) every 18 months or so. Not all are reasonable to travel to see; many last only a few seconds and occur over a remote body of water or an inaccessible wilderness.

As far as we know, Earth (okay, I’m over it, back to the common name) is the only planet where a total solar eclipse occurs; it’s made possible because our Sun and Moon appear nearly the same size in the sky as seen from Earth. Why? The Sun’s diameter is approximately 400 times larger than the moon’s—but the Sun is also 400 times farther away.

(Think about it: Earth has one sun, one moon, and it’s possible we’re the only planet with sentient beings on it who can appreciate an eclipse. Coincidence? I think not—and that’s the subject for different blog entirely.)

Civilizations of yore had colorful, regionalized explanations for what caused an eclipse. The Chinese believed that a celestial dragon devoured the sun; Viking cultures blamed wolves. In Vietnam they believed it was a giant frog. Incan natives thought a puma god was responsible. Ancient man! So stupid.

JUST KIDDING. Superstitions continue today, though. No joke: Many 21st century citizens still consider eclipses to be an evil omen. A popular misconception in some cultures is that they’re dangerous to children and pregnant women, who hide indoors to shield themselves from totality. In India, some people fast, believing that food cooked during an eclipse will be tainted.

In a couple of countries I’ve traveled to, small children were concealed during the days surrounding the eclipse; a rumor circulated that white North American women were there to kidnap babies to take home—that was the insidious purpose of our oversized backpacks.

Some superstitions are pleasant and positive. Leave it to the Italians to plant flowers during an eclipse; everyone knows that they’ll grow to be the most colorful in the garden.

2 thoughts on “Total eclipses: the basics”