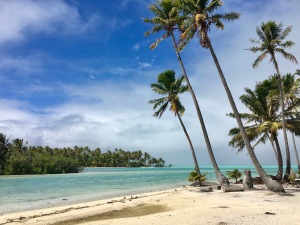 The M/S Paul Gauguin returned to French Polynesia, and all passengers proceeded through passport control before arriving on Rangiroa in the Tuamotu Archipelago. Surprise! The weather was bad and only got worse. All shore excursions were cancelled, and it wasn’t possible to snorkel “Gods Aquarium” (the lagoon). We combed the grey beaches for awhile and watched the waves until the drizzle drove us back to the ship. Rangiroa was eerie—no traditional island greeting by the locals, no popup shops on the dock. Rusted cars, ragged palms, hungry-looking stray dogs, unlike the well-fed pets that ruled the streets of Hanga Roa.

Back on board Feinberg hosted an “eclipse day in pictures” slideshow lecture comprised of shots submitted by passengers. Some were surprisingly exciting and technical taken during the partial phase between first and second contact. Not everyone saw nothing.

Onward to Taha’a. It was very windy and drizzly and flat-out miserable when the early tender boat dropped the first guests off on Motu Mahana, PG Cruises’ private islet of Taha’a. To compensate I began drinking early—something rummy in a real coconut shell—and tried to make some drawings from the bar on the beach as the wind whipped spray onto my sketchbook.

A couple of hours (and another coconut drink) later, the sun came out and revealed Motu Mahana to be what it is: paradise. Picture a breathtaking tropical island. You got it. “Les Gauguins and Les Gauguines”—the ship’s Tahitian hosts and entertainers, adorable young men and women clad in scanty pareos and maros—played ukuleles and sang while a barbecue lunch was served. There was a floating bar, the making of pandanas headbands, kayaking and jet skiing and paddling around in that bewitching blue water.

Waiting for the tender 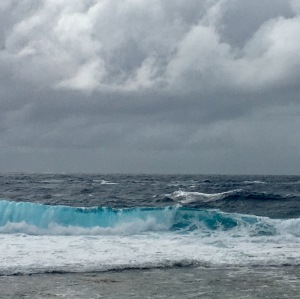