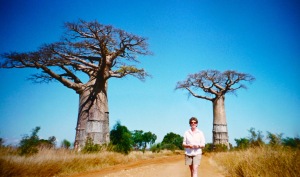 Each day in Madagascar was more freakish than the last.

There are surrealist paintings in disturbing, peculiar hotels, and kooky murals on town walls. Houses are made of red mud—when they eventually melt from the weather, homeowners simply build a new one next door. We saw white wall-eyed chameleons and herds of zebu crossing the road, and otherworldly baobob trees in the spiny forest.

Along the way we left the main two-lane highway to buy gems at a mine, and pressed flower stationery at an artisan shop. We stood among lemurs as they drank from a pool and bounced above our heads through the trees in the Beza Reserve. I observed locals buying wine at the “liquor store”: a wood shack where some kind of red alcohol is fermented in a 55-gallon drum and mouth-siphoned into empty plastic containers held beneath the hose. Candles flickered inside paper lanterns as children carried them in a late night parade. Poor villagers sharpened knives by running with them blade-down in the middle of the asphalt highway. We witnessed a fatal car accident—pedestrians bumble around on the road (and children—children!—play there), though the Malagasy drive like bats out of hell.

It’s impossible to sound out the pronunciation of Malagasy words. Guess how to say the names of following towns: Ambositra? (No. “Am-boosht”.) Ihosy? (“Ee-yoosh.”) Fianarantsoa? (Psych! Just like it looks.) French was also spoken, and I remembered enough from high school to translate “l’eclipse solaire totale” and order in a restaurant. Spoken English was so rare we perked up at the sound of it and searched the surroundings for the source.

Our viewing destination, Morombe, was south of the centerline about 200 miles north of Toliara (“too-lee-ar”— again with the pronunciation) where my slapdick spouse had his wallet and passport stolen (his fault, long story). Have you ever been to an American embassy in the Indian Ocean? Travel Tip 2: Make every effort to avoid this. We wasted several days bouncing keystone cop-like between the embassy and various government agencies, who all extorted money—thirty or sixty cents at a time. 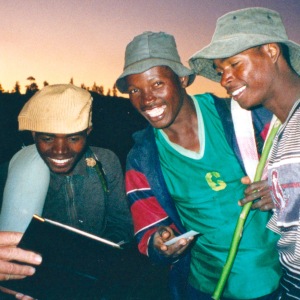 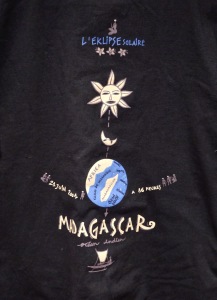